While we're waiting for something big #vmworld


VMware promises that tomorrow (27AUG2012) "Something big is about to happen". For us who are not in San Francisco we can follow the event live by signing up here:
http://info.vmware.com/forms/18162_VMwareNow_REG 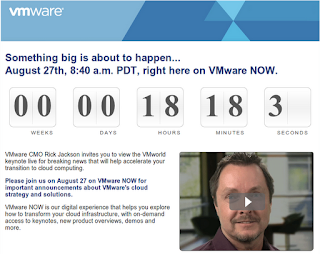 We do know that Microsoft will soon release Windows Server 2012 with an improved version of Hyper-V and they have several TechEd sessions that compare their future Hyper-V version against the current edition of vSphere. We suspect that VMware will announce something as a response to this and more. I guess also cloud and cloud bundles is still something we will hear alot about.